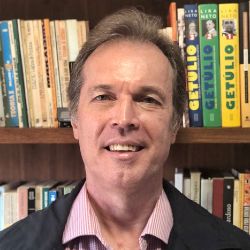 PhD in Public Administration and Government (Fundação Getulio Vargas-SP), Master in Political Science (University of São Paulo), Specialist in Sociology (UFRGS), Bachelor’s degree and degree in Social Sciences (UNISINOS). Professor at the School of Business Administration and School of Economics / Fundação Getulio Vargas of São Paulo and School of Public Policy and Government / FGV-Brasília. Professor at School do Public Policy and Government (FGV-Brasília). He teaches courses on: a) political system and political institutions in Brazil; b) political economy of lobbying and representation of interests (role of regulatory agencies, capture theory, rent seeking behavior of companies and electoral financing); c) federalism, decentralization and intergovernmental relations, with an emphasis on municipal management and public policies. Professor at Universidad del Valle (Colômbia) in the PhD Program of Public Administrationt Professor at Oficina Municipal (NGO that works in the field of municipal administration). Professor at Ibero-American School of Public Policy He was Coordinator of the postgraduate course «Social Projects and Public Policies» (2016-2017) at the Senac Santo Amaro University Campus. Professor at the University of Vale do Rio dos Sinos (1990-1991) and at the Portoalegrense Faculty of Education, Sciences and Letras / Porto Alegre (1993-1997). Researcher at Center for Studies in Public Administration and Government (CEAPG / FGV-SP) in the areas of planning and public policies and studies of decentralization and local government Professor at the Senac Santo Amaro University Campus in the Bachelor of International Relations in Political Science and the latu sensu Specialization course in Public Administration in the area of ​​Management and Evaluation of Public Policies (2012-2017) He has ten years of experience in distance education at FGV On Line in extension courses, MBA and degree in Public Management, professor-tutor of the Specialization courses in Strategic Management in Public Policies (2014-2105) by the School of Extension at Unicamp and of the course «Management and Public Policies» (2013-2014) / São Paulo School of Political Sociology Foundation. He was a member of the Public Management Qualification and Modernization Commission of the Brazilian Association of Municipalities (2009-2011). He has experience in the field of Public Management with participation in modernization and institutional development projects, with an emphasis on decentralization process, organizational aspects, institutional management and planning arrangements, indicators and evaluation of public policies as a basis for decision-making processes in control, audit or regulation, especially in subnational governments. He produces didactic material for the public administration is focused on the themes of planning, management, evaluation via indicators, control and auditing, with an emphasis on subnational governments. He works as a consultant in administrative and managerial modernization projects for public institutions, having participated in more than 20 projects with Brazilian municipal governments. Consultant of World Bank, Interamerican Bank of Development, UNESCO consultant, Natura Institute, British Embassy in Brazil, Latin American Center for Development Administration and Global Initiative for Fiscal Transparency. Advisor to the Public Agenda, a civil society organization that supports the modernization of municipal public management. Winner of the award for best work at the National Meeting of Public Administration (2012). Honorable Mention Award in the monograph contest promoted by the Consejo de Adminstración para el Desarrollo (2008). Associate publisher of Cadernos Gestão Pública e Cidadania. He is Director of Institutional Relations of Brazillian Society of Public Administration.